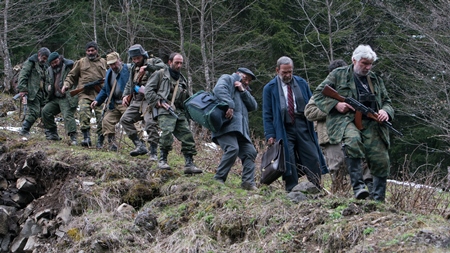 "Khibula" by George Ovashvili will celebrate its world premiere in competition at the 52nd Karlovy Vary International Film Festival.

The Georgian filmmaker George Ovashvili took the Crystal Globe for Best Film at the festival in 2014 for his previous film "Corn Island" which was also funded by MDM.

In "Khibula" he portrays the first democratically elected president of Georgia who was ousted in a military coup. He sets out for the mountains with a group of loyalists to regroup with his supporters. Set against an imposing Caucasus backdrop, we witness a man fighting for power while waging an internal struggle as he heads to meet his fate.

The drama with support from MDM is a German-Georgian-French coproduction of Halle Based 42film, Alamdary Films and Arizona Productions.